In one of his more brilliant ideas, Swiss psychoanalyst Karl Jung thought that interests find US.

We don’t find them.

In other words, you don’t wake up one day and decide, hmmm, I like horseback riding, reading, painting. Or, I would enjoy a career in carpentry, medicine or accounting.

Instead, you fall into one or more of these activities or occupations.

If you choose to live an authentic life, you’ll pursue the interests and occupations genuinely you. They become part of your identity, the fictional somebody, the noun you identify as you (always alienated from the verb you truly are).

Jung’s insight leads me to share a few significant, personal happenings which have occurred since January 2020, all rather mysteriously like they floated up from my unconscious mind or from the cosmos.

With the start of the new year, I resumed doing daily, one-half-hour Zen meditations I had not done since the 1980s.

I did not consciously plan these behavioral changes.

They seemed to have emerged completely naturally, unwittingly, unintentionally.

This colors them with a certain strangeness.

Regarding materialism, another weird transition has occurred—along the same Jungian lines. Having been a fairly skinny, sickly kid, I found myself feeling a compensatory power—strength, success, competence—when my clinical psychology practice began thriving.

Shortly thereafter, and obviously related, I developed a passion for briefcases. I sent away for brochures on them. In the Economist magazine, I saw an ad for Glaser Bags, a San Francisco firm hand-making briefcases and luggage. My mouth watering, I called them for a brochure.

I found a particularly cool briefcase in the vintage collection of Gurkha Fine Leather. By the time Al Gore invented the internet in the early 1990s, I had links to several firms making these items. Ultimately, I purchased the Glaser bag showed below. 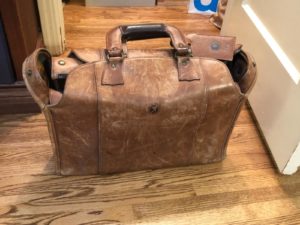 I suppose that my 30-year-old self, sporting one of those way-cool briefcases, added to my professional stature.

(The first, humbling insertion of an aortic valve replacement cured me of that fashion ritual).

My clothes, my profession, my briefcase shouted to the world my significance!

Or so I thought.

Yet another example of Jung’s idea, my interest in these briefcases waned over the past few years. First, I took to simply carrying whatever notepads or files I needed for the day. These beautiful briefcases began gathering dust in the luggage closet at home.

And now, since the Vegan-Meditation thing took hold of me, I have taken to using free, or even ten-cent shopping bags, like the one below, to tote items to and from the office. 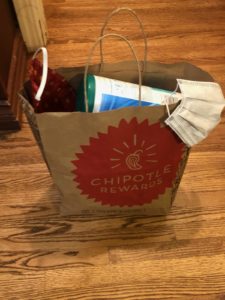 From leather briefcases costing up to $2,000 to paper bags received for free, or for a fee of 10 cents.

Watch how your interests, values, and attitude evolve.

Never forget that you are NOT the noun-like construct you think.