Validating either the mystical, the unconscious, or both, I began engaging in two new daily behaviors starting on:

They began out of nowhere.

I resumed practicing Zazen, a form of Zen sitting meditation, for 1/2 hour per day.

I began eating a plant-based diet, which has intrigued me for some time.

Viewing one documentary (The Game Changers) and observing one of my two Darling Davids take up the plant-based diet, may have initiated the new habits.

But, I can’t know for sure.

We don’t find our habits or interests.

As a result primarily of the meditation, I have had, each day, witnessed perhaps one or two seconds of the flickering of the ego.

What is the ego?

It is our identifying ourselves as a “somebody.”

The ego is, shockingly, a delusion—a point the Buddha himself made nearly 3,000 years ago.

Yes, a fiction, a set of noun-like descriptors highly influenced by social factors, by the Big Other.

We follow an unwritten set of rules. We socialize with others, in part, to unconsciously assess if we are following the rules correctly.

For me, I identify myself as a psychologist, father, husband, friend, sibling.

Those are all simply social roles; they have nothing to do with being.

Ideally, we flow into those identities with a certain lightness, not taking any of them too seriously.

We are our beings, not our social roles.

Here’s the point, and I repeat myself:

For one or two seconds a day, I have enjoyed the slightest, quickly-passing sense of the ego vanishing.

I felt it, too, when walking with elephants today. 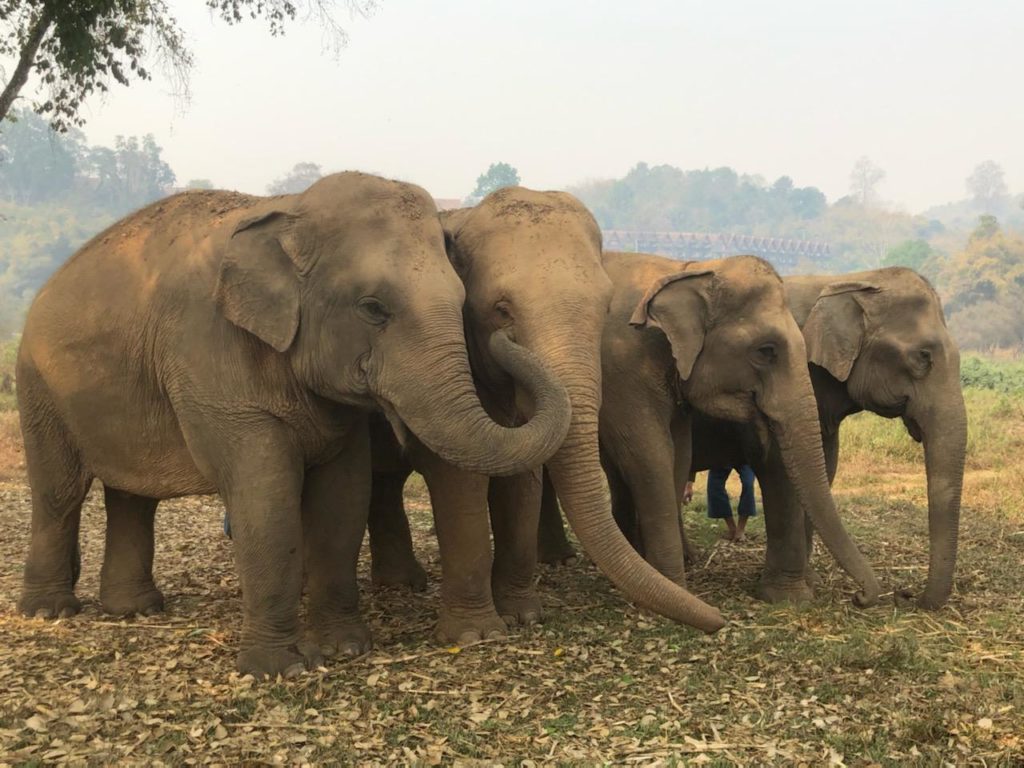 It was majestic, other-worldly.

It is a flashing sense of the one-ness, a connection with the totality of the universe.

Of course, it’s not Nirvana.

A few months of daily meditation, and/or eating a Vegan diet, will hardly bring you there.

And, anyway, it’s a central tenet of meditative practice that you, well, simply concentrate on one thing.

You strive to bring your mind back from its many distractions, including seeking peace, Nirvana, or whatever. Those are all desires outside of the moment. Meditation is the focus on the moment.

The Buddhists speak of it as a form of investigation, not involving faith or belief.

In the case of Zazen, the focus is on the rising and falling of your breathing, the movement of your abdomen as you breathe.

As I’ve noted in prior posts, the idea that we identify ourselves as existing within a sac of skin is insane. Your arm could be surgically removed, and you’d survive. But, deprive you of air for even five minutes, and you’re dead.

Why not identify more with the air around you rather than your body?

Because you’re conditioned to see yourself as just that—a self, an organism existing in a sac of skin. It’s another of the innumerable social rules we follow—how to behave, how to dress, how to speak, etc, etc.

The ego is a social convention.

In case any readers are interested in meditative practices, I write to simply share this sputtering disappearance of the ego.

Meditating One-Year In: Five Reflections
Perversely Avoiding The Present
Melting Materialism
Life in 2020: A Few John Updike Phrases to Wake You Up!